If I was able to sit down to coffee with you today I would tell you that this weekend made me feel more accomplished. It wasn’t filled with any kind of crazy agendas – and frankly on my to-do list I only have a couple of things – but they were things I hadn’t found the motivation to finish and were hanging over my head like a burden.

I would tell you that Friday night we went bowling with Ryan’s work, and showed what a terrible bowler I can be. But, it was a good time! I would say that Saturday I finally went and bought some new jeans because I haven’t bought a new pair in at least a year and a half and the current ones I had to wear lost a button, and the other pair – well are tattered and torn. So I finally went to the store to buy a couple of jeans that hugged my hips just right and made me love them.

I would tell you that I spent Sunday catching up on things to do around the house, like the laundry, and re-organizing my closet so it now looks like this on my side:

I would tell you that Ryan was kind enough to help me get my studio/creating space completed this weekend, after I had it hanging over my head for 2 weeks because I could not get myself to go in there and finish it even though there was less than 30 minutes to finish it, and it feels so amazing to finally have it done! 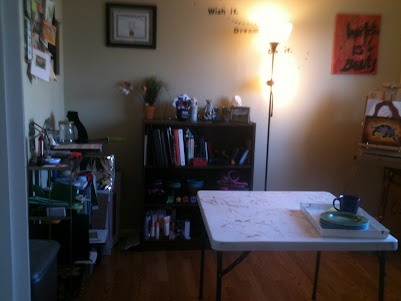 …but Ryan isn’t so keen on the idea. 😉  But it’s a nice thought.
I would tell you that I’m considering creating a new weekly link-up, to launch in February and am trying to figure out what day it should be and if the blog-o-sphere already has too many link ups.
I would tell you that I want to know all about what has been going on with you!! 🙂